"Posidonia" by Carles Bros at the Mediterranean Museum

The Museum of the Mediterranean opens on January 21 at 6 p.m. the Posidònia exhibition by Carles Bros, shows that he wants to claim this plant and be a message in defense of nature and the Mediterranean. An exhibition where Carles Bros gives new life to posidonia, transforming it into pigment, collage and copper. It gives it plasticity and movement and turns it into an artistic object from different sculptures and paintings.

The exhibition will have a set of sculptures that represent the submerged plant on the one hand, and the forms that the dry leaves of the plant take when they are turned into spheres by the action of the waves on the other. The first sculpture is a soft, agile and volatile work, and delicate like the plant at the bottom of the sea. The second is a set of sculptures in the form of spheres made with recycled materials, disused copper and iron wires. Spheres with transparencies and contrasts, the result of hand-curved wires that evoke a smooth and harmonious movement. The sculptures are complemented by various works, paintings and collages, which show the different stages of the posidonia's life.

Posidonia is one of the most important plants in the Mediterranean. Contrary to what many people think, it is not an algae, but a plant with roots, with a stem, that makes a flower and bears a fruit. An endemic species of the Mediterranean Sea whose presence is a symptom of clean waters. 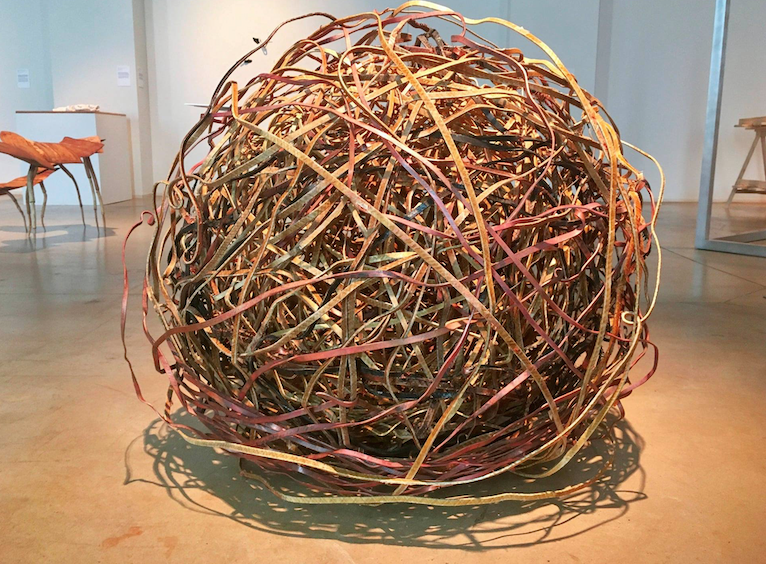 Biologist and artist Ernst Haeckel, who is credited with coining the term ecology in 1869, wrote that one of his first goals when drawing was to enable the greatest number of people “to have access to the wonderful treasures of beauty buried deep in the seas or visible only through the microscope”. He found that art opens doors and sometimes unsuspected paths.

Carles Bros, an artist who has made the sea and the defense of traditional fishing his creative habitat, has found one of these treasures in the posidonia. This aquatic plant, as full of history and legends as it is unknown, is the protagonist of its next exhibition at the Mediterranean Museum.

The exhibition can be visited at the Museu de la Mediterrània until Monday, May 1, 2023, when it will begin an itinerant tour through various places in the Catalan countries and the Mediterranean.

Carles Bros (Terrassa, 1956) , painter, sculptor, photographer and cultural manager, started in the artistic world at an early age when he studied and worked with his mother Joaquima Solanes, an artist-painter. He received his academic training at the University of Girona and the Real Cercle Artístic de Barcelona, where he trained in curatorial studies and cultural management.

Carles Bros has held more than 160 individual exhibitions in Europe and Asia and is invited to exhibit by governments of different countries and by institutions and museums. Since 2010, Carles Bros has been the promoter, director and curator of the contemporary art exhibition "Festival Tramuntanaart".

In 2012, he received the Catalan Fisheries Medal from the Generalitat de Catalunya in appreciation of the defense, throughout the world, of sustainable fishing in Catalonia. He is also the holder of the Sala Parés Young Painting Award (Barcelona), the First Begur Award or the First La Cellera de Ter Award, among many others.

A restless person and a committed artist, he identifies himself with a work of high didactic value that warns of the need to preserve marine fauna and warns of the pollution of the Mediterranean.

Museum of the Mediterranean Carles Bros.

THE FIABCN RETURNS TO THE BARCELONA MARITIME MUSEUM

CHILLIDA LEKU OPENS TO THE PUBLIC "MIRÓ A ZABALAGA", AN EXHIBITION CONCEIVED AS A TRIBUTE TO THE CATALAN ARTIST

IN CADAQUÉS: ARCHITECTS WHO WERE ARTISTS AND DESIGNERS